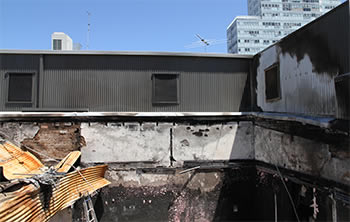 On the 27th December 2013, more than 40 firefighters on six trucks worked to put out a fire that had broken out in the Karaoke Bar next door to the Boarding Rooms in Burwood NSW. 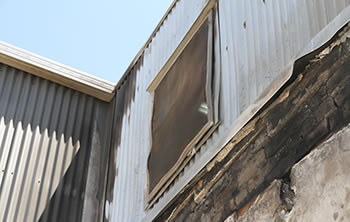 The fire is believed to have broken out around 4.30am and a woman was rescued from a third story window around 5.45am and treated by paramedics on the scene but appeared to be uninjured. A resident of the boarding house next door to the building said they were also evacuated early that morning. The resident said, "the fires got here really quickly, we're just playing the waiting game to see if we can return home." (As reported by the Daily Telegraph 27 Dec 2013)

One INVISI-GARD screen was totally damaged, but remained fixed to the building as the fire was put out prior to the screen reaching its “failing time”. Further down the corridor where the fire was also evident, the INVISI-GARD Screens remained as installed keeping its integrity, however the glass on the windows had cracked. 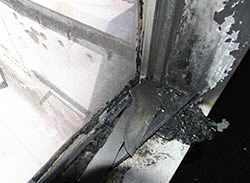 One of the builders was advised by the fire investigators that the temperature on the main damaged wall was in excess of 800 degrees as the fire started in the building directly below the most damaged INVISI-GARD Screen. Had the fire been able to penetrate into the building it could have been a completely different story for the 50 or so residents that lived there.

CSR had visited the site and said "...the building had been incredibly built... to be exposed to such high heat and prevent the fire from entering the Boarding Rooms is credit to the builders – no short cuts were taken".