uses only marine grade GR316 stainless steel mesh in its system. The reason for this is simply that GR316 affords a greater corrosion resistance than a lesser grade such as GR304.

The Australian Stainless Steel Development Association (ASSDA) states that GR316 has a substantial advantage over lesser grades due to its chemical composition. The presence of Molybdenum in quantities greater than 2% increases the corrosion resistance of the metal by 20 to 30% particularly in regards to pitting corrosion.

Some competitors make claims that once the stainless steel mesh is powdercoated, then the advantages of using GR316 are negated.

In fact, all powdercoatings are porous, allowing water and other possible pollutants through the paint to the base metal. One would then be in a situation where one had to rely on the quality of the pretreatment process and the resistance of the base metal itself!

is a system wherein the choice of materials gives the end user the comfort of knowing that with minimal effort, the longevity of the product is assured. 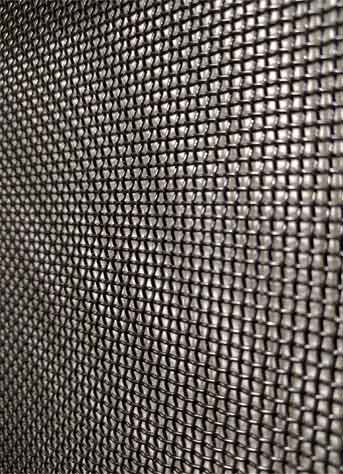 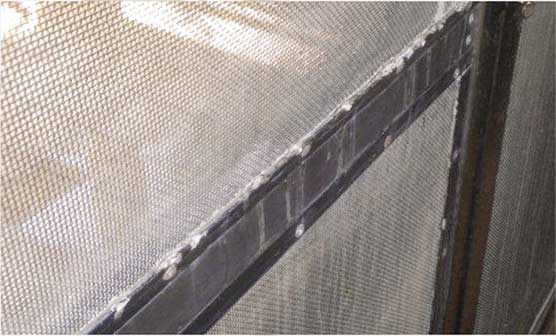 There are two types of corrosion which tend to occur with stainless steel security systems, these being “tea staining” and “galvanic corrosion”.

Dissimilar metals on contact together with poor adherence to a maintenance program leads to a dreadful result for the end user.

Image shows other brand on the market.

Put simply, tea staining is a surface staining phenomenon common to stainless steels. The surface of the steel is stained in small patches and while it looks unsightly, there are no detrimental effects in terms of material strength.

Tea staining can easily be dealt with by prevention in the first instance, or by the application of a suitable metal cleaner if the staining has already occurred.

Prevention is carried out by regular cleaning of the surfaces using a mild detergent and warm water. Care should be taken to remove all soap residues by flushing with fresh water after soaping.

Should the metal already show the symptoms of staining, a metal cleaner such as Nano-Tec or Inox should be applied, carefully following the safety precautions and instructions found on each product’s packaging.

If the stainless steel mesh is not cleaned, then corrosion will continue and eventually pitting corrosion will manifest resulting in degradation of the mechanical properties of the metal.

If these three conditions are met, then galvanic corrosion is inevitable, and the rate of this corrosion is governed by the galvanic potential differences of the metals and the nature of the electrolyte.

In the case of , the anode is the aluminium frame, and the cathode is the stainless steel. However, unlike other systems in the market, ’s intelligent design and construction technique totally isolates these metals from each other. As a result, galvanic corrosion cannot occur as the second critical condition is not met. 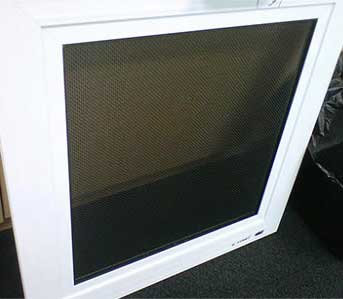 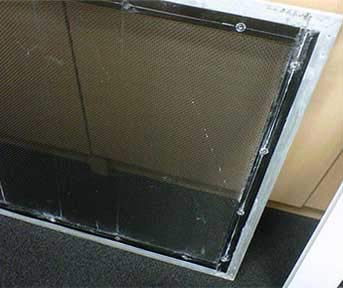 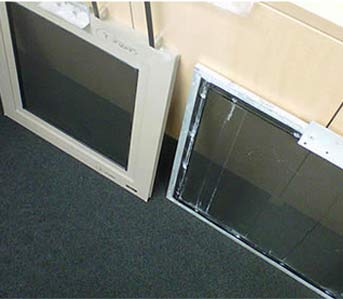 Australian Standard AS5039 requires that security screen doors and windows must exhibit corrosion resistant properties in order that the consumer is able to buy a product that is fit for purpose and will last.

The Neutral Salt Spray Test is one such method, and is also referenced as Australian Standard AS2331.3.1. This test is an inexpensive but effective means of comparing the relative corrosion resistance performance between competing systems.

In essence, this test requires that a sample of a security product be immersed in a sealed booth. The atmospheric conditions in the booth are then stabilized in terms of temperature, relative humidity, pH neutrality, and salt concentration.

In this particular test, the salt concentration has the potential to act as an electrolyte, and this accelerates corrosion in security systems dramatically. The samples are inspected at regular intervals for signs of corrosion, and during these inspections, are washed down and dried before once again being immersed in the booth.

Security doors and screens are required to resist 240 hours in this accelerated weathering test without showing any corrosion whatsoever.

Whilst some competing systems deteriorate as early as the 500 to 750 hour mark, systems have been extensively tested and have resisted 2,000 hours of such immersion without any signs of corrosion.

The Grade 316 stainless steel mesh used in , on its own resists a remarkable 10,000 hours without any signs of the onset of corrosion.

Clearly the benefits of combining the isolation of dissimilar metals using our EGP system, and using the highest quality stainless steel mesh yields superior corrosion resistance performance, and makes the premier security solution for your home or business.